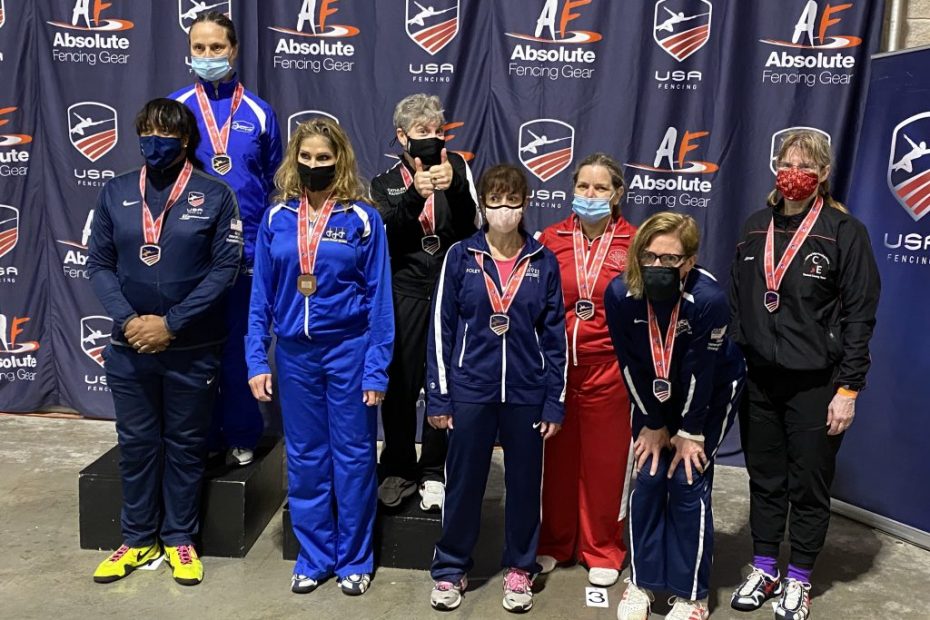 From July 3-12, Mid-South Fencers’ Club had 8 fencers representing our club at the 2021 National Fencing Championships, Jr. Olympics & North American Cup in Philadelphia, PA. After a difficult season with inconsistent training and minimal competition opportunities, our athletes certainly gave it their best shot. We are proud of their efforts and the efforts of their team back at home waiting out the pandemic.

What we did on our Summer (Nationals) Vacation –!

After a year and half of Pandemic Training — Zoom classes, at-home training, masked practices “outdoors” at Durham Bulls Athletic Park, and gathering momentum at local, regional, and finally national competition — Mid-South Fencers returned to Summer Nationals.  A small but hearty crew of 8 — a decrease from the pre-Pandemic high of 30 in 2019 — travelled to downtown Philadelphia for their individual days of competition.  Head Coach Jen Oldham was present throughout, with assistance from Coach Cathleen Randall.

What did we learn?  The 4 “R’s”: Regulation, Resilience, Resistance (tactical), and Recovery.  Ask one of our Summer Nationals fencers and they can tell you what these words mean.  On the strip, especially, “(self-) Regulation” became the word of the day.

All of the team tested their mettle and came back knowing what to do for the 2021-22 season.

Here’s a recap, gathered from the Mid-South Fencers’ Club Facebook and @CoachJenOldham Instagram posts made during the 2021 USA Fencing Summer Nationals in Philadelphia, PA:

We made it to Philly! David FORT kicked off our Summer Nationals competition today in Cadet Men’s Saber.  David is a rising senior from Chapel Hill, NC and decided during the pandemic to push himself competitively as he gears up for college… and it’s paying off! David had moments of awe and prowess and ended up winning two in pools, yet he lost his first DE as he was figuring out how to self-regulate. We look forward to great things from David as he attacks his senior year. Of note, Mid-South alumna, Sky MILLER, competing on behalf of Northwestern University, was a finalist again in Division 1 Women’s Saber, finishing 7th, renewing her A rating.

Day 2 at Summer Nationals was PHOEBE! Phoebe TODD continued our Summer Nationals journey in Philadelphia today by competing in Cadet Women’s Saber.  Phoebe is a rising junior from Durham, NC and decided during the pandemic to ramp up her competitive level. Phoebe won her first direct elimination bout in Cadets as a national competitor.

Give a super big shout out to Cathleen RANDALL who finished SECOND today in the Veteran Women’s Saber, renewing her C rating!! Cathleen bombed her pools — I mean bombed — but showed her incredible resilience and adaptation in the direct elimination round and finished 2nd!!!! Congratulations, Cathleen! Phoebe TODD and alumna Sky MILLER also competed on this same day in the Junior Women’s Saber event finishing 191st and 24th respectively.

Give it up for the return of Carl BADGER! Carl also was a national medalist, finishing 8th in a competitive Veteran 60 Men’s Saber field. Teammate Joe MCLAUGHLIN had a stellar finish today as well, finishing 14th. Way to go, team! Our veteran team displayed fencing is truly a lifetime sport. We also enjoyed a wonderful evening out at an authentic Italian restaurant.

Tyson DECK and Tammy JACKSON took to the piste. This was Tyson’s FIRST National Championship event. He qualified before the pandemic in Y12, but had to wait a year, and now he’s in Y14 Men’s Saber. He will be a freshman at Clement Early College High School next year.

Tammy is a lifelong fencer, who once competed for NC State; now she is competing in Veteran 60 Women’s Foil. Neither Tammy or Tyson were happy with their result for the day, but they showed up and gave it their best. It happens that some days like this!

Coaches Jen and Cathleen took a side trip to Western NY to meet with other women coaches and discuss WFencing, Inc. ‘s programming for the upcoming year. Nat Goodhartz is one of the most decorated and respected fencing coaches in the US and lives on Lake Ontario. She is helping to design a coaching curriculum for WFencing.  She generously hosted the meeting.

Anna SCHIKORE competed in the Division II Women’s Saber event of our National Championships. She fenced with TACTICS. Anna is a rising senior at Apex Friendship High School and lives in Apex, NC. Congratulations Anna on your 69th place finish today!!!

Anna SCHIKORE finished our team on a high note, going 4-2 in pools and finishing 44th in a field of over 100 women across the country in the Division III saber event.

Look at our Instagram post titled “The Parries of Anna.”  Anna SCHIKORE didn’t get all the parries she wanted at her Summer Nationals Championships this year, but she wasn’t afraid to take the blade…

Our USA Fencing Summer National Championships in Philadelphia was a success but we missed our united team and look forward to our return to a full competitive season this fall.  Thank you again to all our fencers and supporters who made competition after an intense and unusual “season” possible!