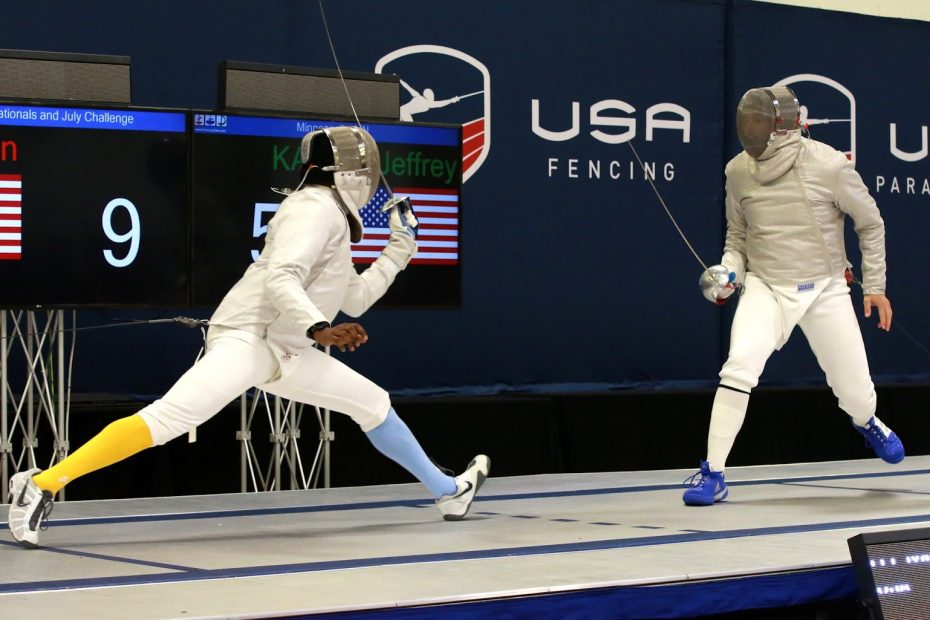 Forge Fencing sent a small, but strong team of 10 to compete at Summer Nationals in Minneapolis, Minnesota from July 2nd to July 10th. Our athletes continue to adjust back into competing, and this tournament was a great way for them to get some more experience on the national stage. Coach Jeff Kallio accompanied our athletes in Minneapolis during this past week. Everyone worked extremely hard and should be proud that they put themselves out there. Congratulations to everyone who competed!

Matthew Chaves kicked off Summer Nationals for the team in Junior Men’s Saber. Matthew fenced strong during his pool, gaining 3 victories. He was just short of his goal of making top 64 in his previous best Junior result.

Matthew went on the next day to compete in Division 1A Men’s Saber. This was his first time qualifying for Division IA. Throughout the event, he continued to learn how to adjust to opponents and referees.

Elina Wunnava came out fighting in her second ever junior event, gaining much needed experience and exposure to the national scene to advance.

Congratulations to Jeff Kallio for earning SILVER in Vet 40 Men’s Saber! Jeff was undefeated in his first round of pool and fought hard in his DE’s before facing off against former Olympian Ivan Lee in the finals. Ivan Lee is a 5 time national champion and a very respected referee and coach.

“Through coaching, refereeing, and fencing, Ivan has given a lot of leadership to the sport of fencing and has given back a lot. I really admire him. He is a tough fencer, so I was excited to have a really tough opponent to work on things to improve my own fencing,” Coach Jeff remarks.

Tammy Jackson also competed in Vet 60 Women’s Epee on Day 3. This was a great icebreaker event for Tammy while she continues to get back into epee.

Tyson Deck fenced extremely well in Cadet Men’s Saber. He has shown huge improvement in the past few months and got three wins in a very tough pool. Coach Jeff notes Tyson “is a very consistent and very coachable fencer.”

Tammy took to the strip again in Vet 60 Women’s Foil. After picking up one win in her pool, she went on to upset her DE match and placed in the top 16!

Elina Wunnava showed great resilience in Cadet Women’s Saber. Her ability to take feedback and try it was excellent throughout her pool. She learned a lot about fencing at such a high level and knows what she needs to work on next time!

Jeff also joined some friends from Nazylmov Fencing in Vet Team Men’s Saber, earning a BRONZE medal. It was a very exciting team event, and they narrowly missed out on making it to the gold medal bout by one point.

Tyson finished off strong in his final Y-14 event. His fencing was solid as he won his first DE and went on to fight a very strong opponent in his next. We look forward to Tyson’s growth as he enters his Cadet years.

Cathleen Randall is working her way into the competitive arena in the Vet 50 Women’s Saber. She got some great wins in her pool and worked hard in her DE.

Nearing the homestretch, we had Matthew Chaves, Justin Mol, Spencer Mol, and David Fort competing in Division II and Division III Men’s Saber. The boys all did extremely well in both these events. All of them got some hard-fought wins in their pools. David had some nerves going in, and lost his first three pool bouts. After gaining his composure, he went on to win his last three pool bouts in Division III. Spencer dominated in his pool, losing only one bout 5-4. Matthew had a standout result in both Division II and Division III, getting top 32 in both.

Valeria Gerasimova closed it out, competing in her first ever national tournament. Valeria had a challenging pool in Division III Women’s Saber, but got touches in nearly all of her pool bouts. We are looking forward to seeing her get out there more and happy to share coaching with her primary club, Cape Fear Fencing near the coast of NC.

Summer Nationals was a great way to end and set intentions for a new season. We look forward to others being able to get back to competing nationally and gain more experience as we still recover from the pandemic. Our athletes have only had a training facility to practice in for the past 145 days(!!!) Despite this, we’ve had some outstanding results and great displays of resilience. Both Tyson Deck and Anna Schikore finished second on the regional points for their respective age groups. Matthew Chaves made his national points in Juniors this year. What the team has been able to do in this short time has been phenomenal.

Congratulations team on finishing out the season strong. The sky’s the limit!